Clifton and Michelle Cottom lost their daughter, Asia, in the crash of Flight 77 on 9/11/2001. Now, they are releasing a book on the anniversary of her death, ‘Asia’s New Wings’, that tells her story and brings a message of triumph, love and hope.

Most people think of the morning of September 11, 2001, with sadness and horror, but for Clifton and Dr. Michelle Cottom the loss ran much deeper. Their young daughter, Asia, was aboard Flight 77 with her teacher and a select few fellow classmates, on her way to California for a special school trip which she won due to her infallible academic insight. Asia’s plane crashed into the Pentagon, resulting in no survivors on board. Now, her parents and brother are releasing a book on the 13th anniversary of her death to honor her memory and tell the story of a bright and vibrant young lady, as well as to honor her memory by promoting the Asia SiVon Cottom Memorial Scholarship, a fund established in Asia’s memory that sends deserving students to college. 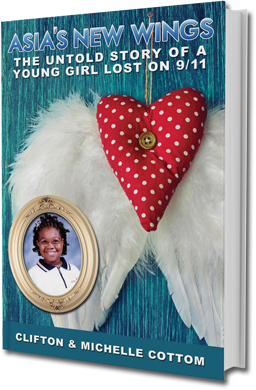